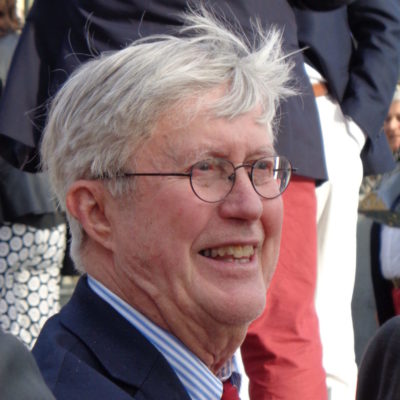 Dick Carter began racing small boats on Cape Cod and came out of Yale’s Corinthian Sailing Club as a champion. He raced sailing dinghies before turning his hand to yacht design despite no formal training.

Not many ‘amateur’ yacht designers would dare to enter the first boat they had ever designed into the epic offshore Fastnet Race, let alone with the intention of winning it. But that is what he did in 1965, beating all 151 other yachts, some sailed by the most notable sailors of the day. He repeated the feat 4 years later with another of his own designs (which also won the Admiral’s Cup that year as top boat and top team).

His radical innovations created fast and comfortable boats which were much in demand in this, the golden age of offshore racing. They were commissioned by the top sailors and succeeded in winning the Admiral’s Cup, Southern Cross Series, One Ton Cup, Two Ton Cup and many of the biggest races.  He even went on to design the massive 128-foot Vendredi Treize to sail single-handed in the 1972 OSTAR (trans-Atlantic) race – the longest boat ever to have been raced single-handed.

But after just a decade at the top of his game, he quit the world of sailing and moved on to other challenges. Many of his sailing contemporaries thought he was dead.

While his career as a yacht designer may have been brief, the impact of his innovations has lasted the test of time, with some of his ideas being found on virtually every yacht today.