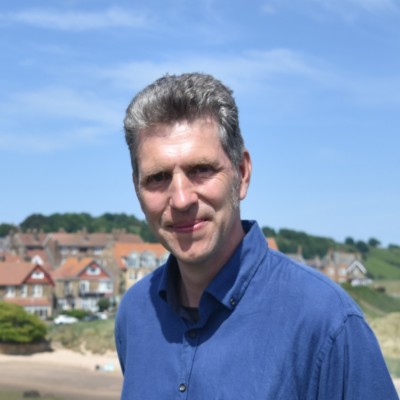 Dr Ben Robinson is a British archaeologist, broadcaster and author. Known as ‘The Flying Archaeologist’ he has appeared as a contributor and presenter for Channel 4, ITV and the BBC. He currently presents BBC Two’s Villages by the Sea, an exploration of the surprising heritage of some of our most treasured coastal villages.

A youthful Ben persuaded the Royal Air Force to teach him to fly. As a pilot of microlight aircraft he has enjoyed an aerial perspective on landscape history and archaeology for many years since.

Ben gained a MA and PhD from the University of York. He began his career as a digging archaeologist in what was once called ‘rescue archaeology’, retrieving evidence of past lives and long lost places from the jaws of bulldozers. After more than a decade as heritage adviser to a planning authority he joined English Heritage as an ‘Inspector of Ancient Monuments’. Ben now heads a team that investigates and saves threatened historic buildings, monuments and places.

Ben’s television and radio work includes many research and on-screen contributions to archaeology and history programmes [He has taken Griff Rhys Jones for a microlight flight, kept Rory McGrath upright as he ‘slodged’ on stilts, immersed himself in a mist of preservative to show Mary-Ann Ochota prehistoric boats, shared a balloon over Bristol with Helen Mark of BBC Radio 4’s Open Country, and has helped the Travel Channel’s Expedition Unknown in its quest to find King John’s treasure].

He was a regular contributor and site director for Time Team (Channel 4, 2005-2011). His TV credits as a presenter include The Flying Archaeologist (series, BBC Four, 2013),The Zeppelin Terror (BBC Four, 2014), Secrets from the Sky (series, ITV, 2014 with Bettany Hughes),The Last Journey of the Magna Carta King (BBC Four, 2015) and many regional BBC Inside Out programmes that cover heritage themes in current affairs (BBC 2013-2019).
Ben co-presented three series of Channel 4’s Britain’s Most Historic Towns with Professor Alice Roberts (2018, 2019, 2020). In 2019 he presented the BBC series Pubs, Ponds and Power: The Story of the Village (BBC One, BBC Four, BBC Two). This was followed by two series of Villages by the Sea, which ran on BBC Two in 2020 and 2021. The third series was filmed in the summer of 2022 and is due to be aired later in the year.

Ben’s book England’s Villages: An Extraordinary Journey Through Time was published by Blink in Autumn 2021.

Ben lives in Cambridgeshire with his family.