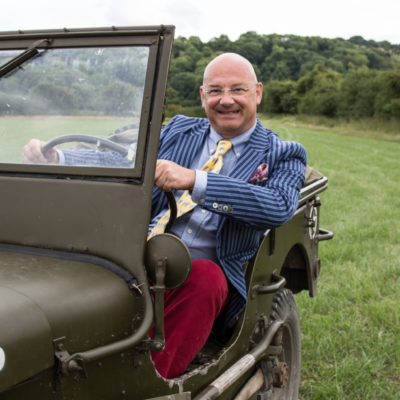 Peter Caddick–Adams was educated at Shrewsbury School, the Royal Military Academy Sandhurst, and Wolverhampton University, where he gained First Class Honours in War Studies; he received his PhD from Cranfield University. He worked in the House of Commons, taught at Oxford and Birmingham Universities before being appointed Lecturer in Military and Security Studies at the UK Defence Academy in 1999, and Lecturer in Air Power in 2012. Since 2018, he has been visiting Professor at the University of Wolverhampton. Peter has pursued a second career in the UK Regular and Reserve Forces, was commissioned into the infantry in 1979 and joined the reserves in 1985. He has extensive experience of various war zones, including the Balkans, Iraq and Afghanistan.  During 1996–7 he was the official NATO Historian in Bosnia, based in Sarajevo. He was also the UK Historian during the Iraq War of 2003, on the staff of the British Commander, based in Qatar and Iraq. Peter has conducted around 400 battlefield visits around the world covering all periods in history from Troy to the siege of Sarajevo, and has also led many official commemorations with serving soldiers and veterans. He has guided princes, peers and politicians, military commanders and senior executives.  When walking the terrain, he explores the challenges of senior leadership, strategy and logistics in a crisis – ‘how to react when the wheel comes off’. He has written six books, the most recent being Sand and Steel: A New History of D-Day (Hutchinson, 2019) and Snow and Steel: The Battle of the Bulge 1944-45 (Random House, 2014). Two previous works, Monty and Rommel: Parallel Lives (Random House, 2011) and Monte Cassino: Ten Armies in Hell (Random House, 2012) were best sellers. Awarded the Territorial Decoration (TD) in 1997, he was made a Knight of St Joachim (KJ) in 2016, elected a Fellow of the Royal Historical Society (FRHS) in 2012, Fellow of the Royal Geographical Society (FRGS) in 2017, and is a member of many organisations, including the Guild of Battlefield Guides and the British Commission for Military History. Living near Salisbury, he is an Honorary Patron of the Chalke Valley History Society, a Councillor of the Ancient Corporation of Hanley, and helped found the National Saucer Protection League, which campaigns to protect the humble cup and saucer against the relentless global march of the mug.