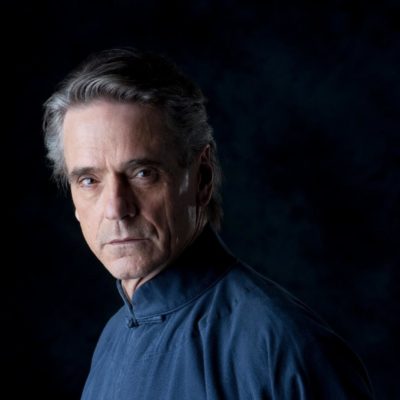 Jeremy Irons won the Academy Award for Best Actor in 1990 for his performance as Claus von Bulow in Reversal of Fortune. He is also a Golden Globe, Emmy, Tony, and SAG award winner as well as the recipient of an Honorary César Award in 2002 and a Premio Europa Per il Teatro.

Irons began his formal theatre training at The Bristol Old Vic Theatre School. He then joined the Bristol Old Vic Company where he performed in many productions including: The  Winter’s Tale, Hay Fever, Macbeth, The Taming of the Shrew and The Boyfriend. Appearances on London’s West End followed with Godspell and Simon Gray’s The Rear Column; at the Young Vic he played in The Caretaker and Much Ado About  Nothing.

Irons received a Tony for his performance in Tom Stoppard’s play The Real Thing ( 1984)  and continued to appear on the London stage in the National Theatre’s Never So Good (2008) and the Royal Shakespeare Company’s The Gods Weep (2010).

In 2016, he performed the role of James Tyrone in Eugene O’Neill’s Long Day’s Journey Into Night as part of the Bristol Old Vic’s 250th anniversary; this production transferred to Wyndham’s Theatre in London’s West End in January 2018, and then traveled to BAM’s Harvey Theater in New York and the Bram Goldsmith Theater in Los Angeles.

Additionally, Irons was the featured actor and executive producer of TRASHED, Candida Brady’s award-winning documentary on the environment.

Irons has a rich and much-lauded career in television as well. He  was awarded Best Supporting Actor Golden Globe and Emmy for his role in the television miniseries Elizabeth I (2005) alongside Helen Mirren. He went on to play Pope Alexander in the Showtime historical series The Borgias (2011), and portrayed Henry IV in the BBC Two series The Hollow Crown opposite Tom Hiddleston.

Irons may be best known for his role as Charles Ryder in the cult TV series Brideshead Revisited (1981).

Most recently Irons starred alongside Regina King in the HBO series WATCHMEN, the revamp led by Damon Lindelof.   Set in an alternate history where masked vigilantes are treated as outlaws, WATCHMEN embraces the nostalgia of the original groundbreaking graphic novel while attempting to break new ground of its own. He has been nominated for an Emmy: Lead Actor-Limited Series.

Jeremy Irons is Patron of the Prison Phoenix Trust and the Hope Foundation, and Chancellor of Bath Spa University.