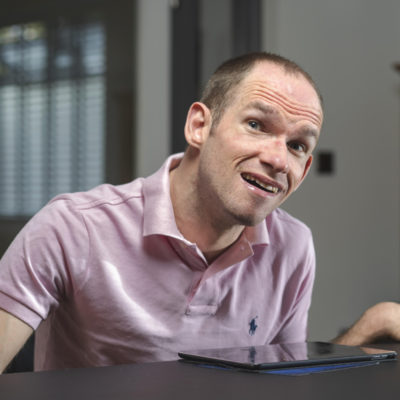 Writer and podcaster Josh Barry was diagnosed with Athetoid Cerebral Palsy following complications with his birth on the Isle of Wight in June 1987. A determination to live a full life lead him to complete mainstream education followed by university where he undertook a BA in Scriptwriting for Film and Television and an MA in Writing For The Media. After university Josh toiled with the idea of being a jobbing scriptwriter but knew his ambition lay elsewhere and after conducting a handful of interviews with noteworthy individuals at university, he realised that interviewing was something he took a lot of pleasure from. After attempting to create a radio documentary surrounding the history of UK theatrical agents, in October 2016 Josh realised that he wanted to enter the podcast world. Now into its fifth year, Josh’s podcast Beyond The Title is going strong and now is the subject a nationwide tour.

The first lockdown gave Josh the opportunity to reflect upon his extensive catalogue of interviews and became the inspiration for his second book Beyond The Title: The Yearbook published by Book Reality. Profiling over forty of Britain’s best loved figures, Beyond The Title: The Yearbook provides context to where these stars sit within the psyche of the nation. With an original foreword by the comedy legend Barry Cryer, this book tells the enigmatic story of Britain’s showbusiness past and present through the personal stories of some of its biggest stars. If you’re a fan of the Arts, this is the perfect book for you.