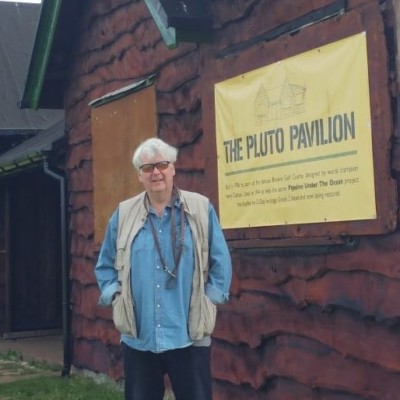 Tim Wander is a Chartered Engineer who tried to retire a few years ago but somehow managed to get even busier. Today he is an historic consultant, author, lecturer and a specialist in historic building renovation.

Wander has written many books about the early days of radio broadcasting, Marconi and several BBC radio plays. His first stage play debuted at Northwood House in November 2018 and his second has just been accepted for a main theatre run in Chelmsford next year with a possible west-end transfer. In 2016 Wander took over as Consultant and Curator for Science and Industry for Chelmsford City’s museum service. He is now developing plans to celebrate the various centenaries of British radio broadcasting in 2020 and 2022.

For nearly 30 years Wander has been fascinated with the military and social history of the Isle of Wight and in 2018 he published Culver Cliff and the Isle of Wight at War. But it was the first edition of Where PLUTO Crossed the Path that  ignited Wander’s interest in the PLUTO pipeline project (photocopied from a rare and now lost) example in Sandown Library. This led him to walk the PLUTO route on many occasions and drove his involvement with the ongoing restoration and new research surrounding the PLUTO pavilion on Sandown golf course.

Wander lectures all over the UK (and on cruise ships) on the history and career of Marconi, early wireless and broadcasting, military history, PLUTO and the amazing history of the Isle of Wight.

As Farthing’s original book is now unobtainable it became a goal to update and reprint it with Farthing’s help and to add photographs. Their recent research has cast light on a whole new story for the second world war’s most ambitious engineering project and it is set to turn the established history on its head.