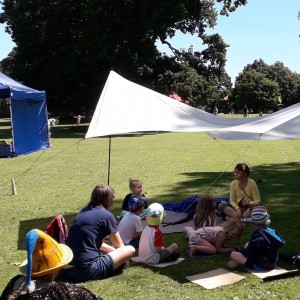 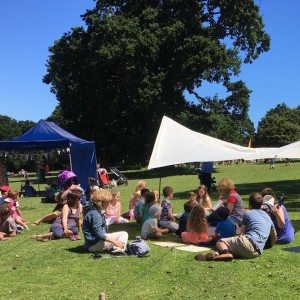 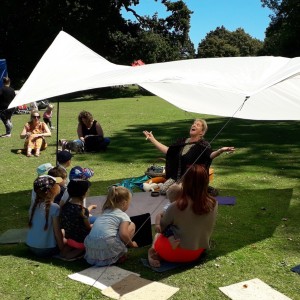 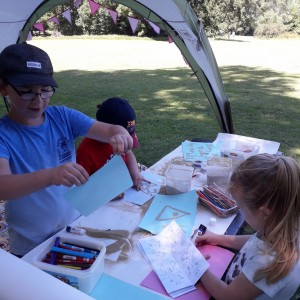 Monsters, owls, teddies, superheroes and the Old Woman Who Swallowed a Fly were all in evidence at Appley Park on Saturday 22 June as local  authors and storytellers supported Appley Day by sharing their stories in the sunshine and promoting the Isle of Wight Literary Festival, the IWLF Schools Programme (both of which will take place in October) and the IWLF Story Festival, scheduled for February next year.

Storyteller Sue Bailey delighted the children with her stories of teddies and Ryde, while author/illustrator Jules Marriner engaged with puppets and readings from her story of Fidget, the fussy-eater owl. Local author/illustrator Peta Rainford was there too, exciting the children with monsters and superheroes from her picture book about anxiety and resilience, The Niggle.

As well as telling their stories, Sue, Jules and Peta led the children in various nature-based craft activities, including nature weaves and sand pictures.

The local authors and storytellers of the IWLF Story Festival do several ‘pop-up’ events during the course of the year – catch them next at Ventnor Fringe.

IWLF will be at Northwood House, Cowes, on 10-13 October 2019, while the Schools Programme, taking national and local authors and performers into Island Schools, runs alongside it, on 10-11 October. The IWLF Story Festival will take place on Friday 21 and Saturday 22 February 2020, at the Riverside Centre in Newport.